Swearing is everywhere! But what about our kids and swearing? The swearing on TV has been kicked up a notch to where there seems to be no censoring, but why? I watched Dexter, the first 4 seasons, and yikes! Can that sister ever swear!

And I caught myself swearing more too. Perhaps the more we hear it the more it becomes our natural language. After all, “F” is a verb, noun and adjective! Since running out of Dexter DVD’s, my swearing is down to a controllable level, lol.

At home, I do get to hear a lot of descriptive words, but not swearing, yet words that I would rather not hear from my little darlings, yet every so often, I swear that I hear a swear word. Then again, I sometimes believe that I am hearing the F-word during food commercials, so I know that I am imaging things.

I’m sure that my two boys are swearing around their friends, and I’m sure they are swearing quietly to each other, but I don’t really need to hear it for myself. 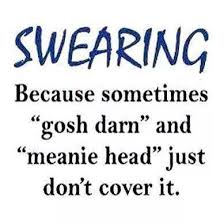 swearing is everywhere, but do we allow ourselves or our kids to do it?

Yet across the street from me is another teenage boy who swears a lot. And it is not by accident like us adults when we stub our toe, he is accenting the swear words only in his sentence, and trying to pass them off as injury-induced swear words.

As I have mentioned in previous posts, I live in a government housing unit, which for the most part is a good place to live.

Housing has different rules than regular rental units. Tenants can actually be evicted for “disturbing the quiet enjoyment of other tenants”.

So this morning, from across the street, I got to hear F.U. approximately 10 times, one right after the other over the period of 30 seconds. If my kids were still little, I’d be really mad. 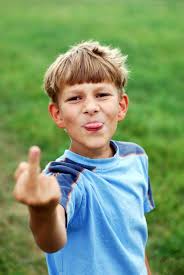 not so cute is it?

This week, across the street again, the 7 year old daughter is in the front seat of the truck waiting for the step-dad, and she accidentally hits the power door locks. I hear him say “open the F-ing doors right now”.

So what the hell is going on here? I can tolerate people swearing, I’ve let out a serious series of swear words myself. I don’t like to hear kids swearing, they actually sound really stupid, but it’s not my kids yelling it, so who cares? But what is going through the mind of this man that is swearing at his little girl? Over a stupid little thing like the door locks?

I did report this man to management. And because he is not really supposed to be living there, the complaint was issued against the mom, because she is responsible for her company and their behavior. I can’t stop him from being verbally abusive towards his wife and daughter, but I can do my part to report him.

So what’s the answer? I think we have to consider that swearing can be a form of verbal abuse. Some words are mean and hurtful and swear words are often used for that purpose. So given that, I very seldom swear in front of regular people or my kids, but when I’m alone, it’s “F” everything! In the end, I think as long as the kids aren’t swearing at you, or younger siblings, and you aren’t swearing at them, then I guess we can’t worry about what the rest of the world is doing.

But how to get kids to stop swearing? Here are some suggestions:

Don’t worry, I’m sure you are being a great single parent, or you wouldn’t be reading up on how-to’s, more on you deserving an A for effort here.

This is one man’s thoughts on swearing, from his childhood to adulthood, and all the hidden agendas he discovered related to swearing.