J.K. Rowling seems to get applause from having been on welfare to being a billionaire. But think about this! Yes, she did some writing while she was working YET was also single with NO children. At this point she has three chapters of the series, written pre-baby.

Later on, when separated with ONE child to raise, and not working, she starts collecting welfare, for about five years. For five years!

In year 3 of the welfare years, she gets an advance of about $3,000 from a publishing house. Not quite enough to quit the handouts yet. In the 4th year of welfare, J.K. gets some income, in the form of a $15,000 grant, to allow her to keep writing. To keep writing? What do they think the welfare has been doing? 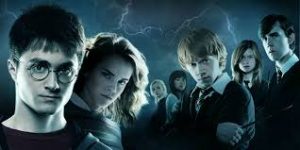 Year 5 of welfare, the big bucks start to come in, first is the $105,000 from the sale of the rights to the series. She moves from the welfare flat to a real home. Five freaken years! Five years sitting at a desk working on a novel. With only one kid.

Couple years later, J.K. was worth ONE BILLION dollars. Un-frickin-believable!

jk rowling, in a coffee shop, where she would write all day

Now of course, J.K. has been giving away millions of dollars to child and poverty organizations. And that is very very nice (some of that is tax-deductible, just saying). Also consider that although she is giving to charitable organizations, the actual real life people that sponsored her non-working life, was the people that are dragging their tired asses off to work. People that are dropping their babies and toddlers at daycare. People that are not sitting in the cafe all day writing while baby sleeps, like J.K. did (like the photo-op image to the left). The real sponsors or financial backers of her books are the people who are not, for the most part, getting any of the millions that she donates.

Now it is time to do the math. One billion dollars, divided by the 5 million population of Scotland, equals $200 each to every single citizen. Check it out and do the math, at JK’s Wikipedia page.

For those of us that don’t choose the sit on welfare while pursuing creative interests, what do we do? Here’s a post on single mom choices.